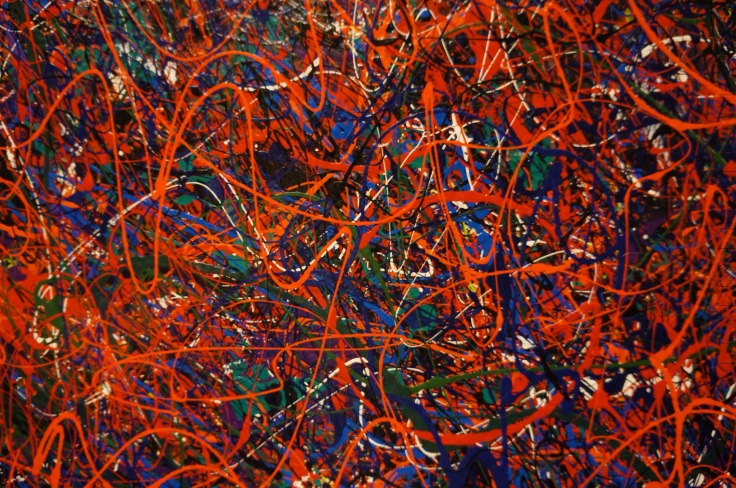 This painting was created by our dad, Charlie Haskins Sr. It is made entirely out of silkscreen ink. The hundreds of layers of colorful line work you see were carefully applied a single day at time over a period of seven years!

Dad produced thousands upon thousands of signs for Franz, and although this project was made at Franz Sign Company, it was something dad made for himself. During his last seven years there, dad would end each day by dripping the leftover ink from that day’s orders onto this large sheet of plastic. Much like the painter, Jackson Pollock, dad created this picture without the aid of a brush. By orchestrating his loaded squeegee above the plastic sheet, he slowly dripped the ink into various shapes and patterns to help create an overall composition. As he added different hues, he would experiment with how he applied the ink and discovered ways to change the line quality in the work.  Sometimes he would apply the ink from far away and sometimes from an extreme close up. This technique was able to give him varying thicknesses in his line. He worked on this project in secret nearly the entire time and didn’t show anyone what he was working on until he felt that it was completed.

Once it was finished, he told me what it was like to work on. He said there were several times he had impulses to add different colors but had to be patient and work with the materials at hand. He told me occasionally a shirt or a political sign would get ordered and it contained a color he previously hadn’t had access to and he would get very excited. Sometimes it would be an expensive metallic ink or a neon color so rarely used in sign making that he would get lost in the process and just watch in awe as the ink cascaded from the squeegee and spilled out into valleys.

He told me that although he repeated the same process of dripping ink on the piece over and over for seven years, he was engaged with each additional mark. He believed that, although superficially it seemed the same each day, each application was unique.

More than anything else, I feel like this painting is a reflection of dad’s philosophies about what art can be and what it means to be an artist. As a kid, he would watch me draw and often say that a true artist should never blame his tools; they should try to experiment with lots of different media instead of specializing in only one; an artist should challenge themselves to be as creative as possible given whatever materials they have at their disposal.