Yesterday was such a special day!
I finally got to reveal two secret paintings that were commissioned for Stan Workman's twenty fifth anniversary celebration as choir director at Portsmouth's 2nd Presbyterian Church.

For the occasion I was asked to create a portrait of Dr. Workman as well as a painting of the exterior of the 2nd Presbyterian Church. I was told the paintings would be a surprise and would be presented to Stan at a secret dinner party. Much like Stan however I had no idea what this dinner was going to be like!

I'm sure for Stan things seemed to start normal enough. Stan was told that he would be playing the music for a fellow church couple's anniversary party but little did he know that as he played piano in the corner of the large dining hall, that all the people in attendance were there to celebrate him!

Stan must have had a few questions about the folks walking in and even more as a curious clergy member took over as mc. The man introduced himself as "Father Guido" and spoke with a heavy Italian accent. While lighting a cigarette the man thanked everyone for attending the night's "ruse" and keeping the big secret.
He then asked his good friend Stan Workman to join him on the stage.

Father Guido quickly dressed Stan in a robe, sat him down in a throne, and placed a crown on Stan's head. As Stan began to realize what was happening Father Guido exclaimed, "This is your life, Stan Workman!"

The night was filled with jokes, stories, surprise guests, and guessing games. Friends from Stan's early career, students, and fellow musicians took the stage and shared stories about their time with Stan and paid him tribute in song.

So many people shared their love for Stan and his work. They even presented Stan with a large donation from the group to fund organ preservation.

Afterwards it was my turn to join in and unveil the paintings I had made for Stan. 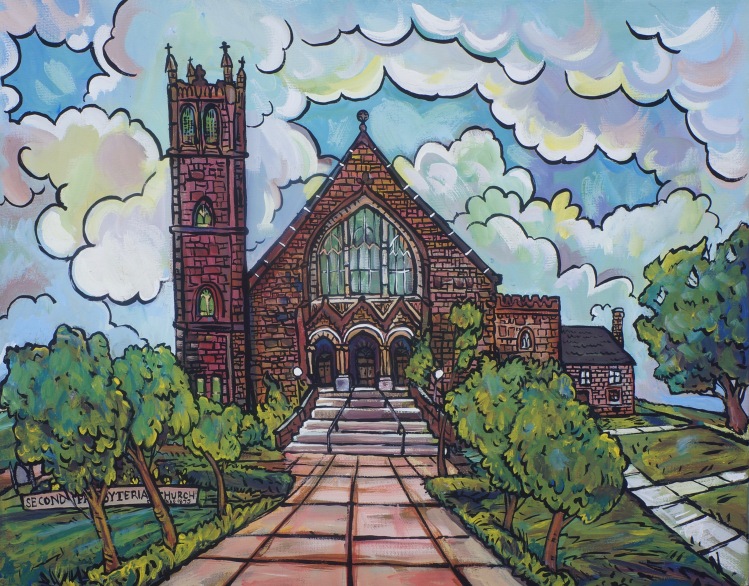 It was so humbling to be apart of this event and share in celebrating Stan's accomplishments. I'd like to thank all the folks at 2nd Presbyterian for inviting me and for asking me to paint their beautiful building.